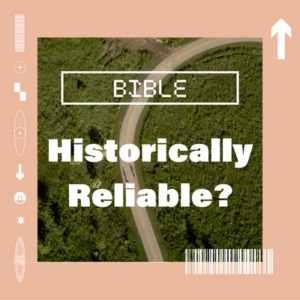 BIBLE: Is it historically reliable?

By the measures typically used to determine the historical reliability of ancient manuscripts, the Bible (that is, the 39 individual books that comprise the Old Testament together with the 27 books of the New Testament) performs very well. By “reliability” we mean, did the historical events to which the Bible refers take place in real space and time? And if so, did they happen as the ancient writers described them? Are they verified internally, within the entirety of the text itself? Are they verified externally, by other writers of the period? Does archeological evidence exist of the Bible’s veracity? Do multiple copies exist of the same writings—and were those copies produced within a time frame that could have reasonably relied upon the authors’ memory of recorded events? By these standards, the Bible has excellent historical credentials.

What we call “The Bible” today is actually a collection of writings by a number of different authors, produced over a period of some 1500 years. We call it God’s word even though God didn’t physically write it. Instead, he inspired ordinary people to record what they saw and heard, and what he revealed to them. In the Old Testament, we have a record of God’s dealings with his chosen people, the Jews. In the New Testament, we have a continuation of that record, through first century accounts of the life and teachings of Jesus Christ, the Jewish Messiah, and the early history of his followers, who came to be known as Christians.

The ancient Roman historian Tacitus wrote about the execution of Jesus at the hands of Pontius Pilate in his final work, Annals; Tacitus also reported the existence of the early Christian church and recorded such historical events as the burning of Rome in 64 A.D. First century Jewish historian Josephus writes of Jesus and his brother James in his Antiquities. And the accounts in the New Testament itself were written by eyewitnesses (and those close to them) who had first-hand knowledge of the events themselves.

Archeological evidence authenticates the Bible as well. Archeology can’t dig up everything that happened in the past, and it certainly can’t dig up God. But it can corroborate the existence of things that are recorded in the Bible. Only about 5% of the sites mentioned in the Bible have been excavated to date, but what has been discovered indicates there is much more to be found. In recent years, archeologists have discovered the ruins of the biblical city of Ziklag (where King David hid from King Saul); the base of a stone watchtower in Southern Israel dating to the time of King Hezekiah; and from the site of the Temple Mount in Jerusalem, weights and coins that affirm the record of temple life in the 4th century BC.

As biblical scholar David Capes notes, “Every day we depend on a few trustworthy people when it comes to some of life’s most important issues. We bet our lives and happiness on them—and we do so without any scientific, objective proof. Instead, we simply trust others to tell us the truth. Whether you regard the Bible as reliable probably depends on the people you trust. There are two billion Christians who rely on the Bible to tell them the truth about God. They have staked their lives on it. They “bear witness” that it is true. But they are not alone. There are scholars, historians, and archaeologists who have studied the Bible in depth and testify that it is trustworthy.” (https://www.exploregod.com/articles/is-the-bible-reliable)

If the Bible were simply an ancient history book, it would probably not be terribly controversial. But it claims to be much more. It claims to be God communicating with us. And it makes very particular truth claims, too: that God created the heavens and earth; that Jesus was God in the flesh; that his life, death, and resurrection ushered in the Kingdom of God, and more.

Critics of the Bible and skeptics of Christianity are quick to point out that discrepancies exist in the Bible—small inconsistencies and variances within the text and from copy to copy—but despite these claims the Bible’s text has remained remarkably consistent over thousands of years…and none of the variances significantly impact or change key Christian beliefs or claims.

2 Peter 1:16-18 For we did not follow cleverly devised stories when we told you about the coming of our Lord Jesus Christ in power, but we were eyewitnesses of his
majesty. He received honor and glory from God the Father when the voice came to him from the Majestic Glory, saying, “This is my Son, whom I love; with him I am well pleased.” We ourselves heard this voice that came from heaven when we were with him on the sacred mountain.

Bible Ep08 Video Segment: (5:09 – 5:57) [Ellie] For a book that is centuries old, there’s no way we can trust that the Bible has been transmitted reliably. [Julia] That’s what I thought too – but I’ve heard the four Gospels can be dated within decades of the events they’re about. So, I guess that means the people who saw it happen were still alive when the books were written. [E] Like no way that’s been handed down through history without any significant changes! [J] That’s the crazy thing. I read that when scholars compare thousands of surviving biblical manuscripts, they found almost no variations that affect any essential teaching of the Bible. Like less than 1%, and only minor things like different spellings and orders of words. And that’s after thousands of years of copying.

>>Go to the Bible episode